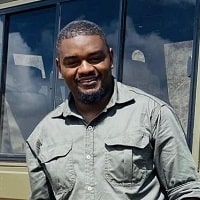 Vianney jacob Kabwine was born by the shore of lake victoria in mwanza and moved to arusha to join his father, who was a safari guide. Brought up around guides, along with the inspiration he got from his father. Vianney joined the wildlife club at his school and it was where he developed his wildlife passion and started on his career path in the bush.
Vianney started out at nomad’s greystoke mahale and become one of few Tanzanians to have privilege of close interactions with our nearest living relatives, namely the chimpanzee. From there he went to selous game reserves and became a proficient in game drives, boating, fishing, fly camping and walking safaris. He later moved to the northern circuit at Singita grumeti reserves, where he became a part of the 2012 best hotel and guiding winning team at Singita. After few years he went on for more challenges and he decided to join legendary expeditions . Where he became one of the iconic guides. Vianney is now focusing his guiding along Tanzania’s famed northern circuit . Vianney is a trained basic First Aid responder and a keen wildlife photographer. Vianney has been the only Tanzanian guide ever to be nominated for Africa Geographic awards in 2018. With over thirteen years of experience in the bush and four years of wildlife photography experience. He may not be able to get you your award winning shot but he will get you  photographs to remind you of Tanzania and the knowledge he gave you in the bush that you will cherish forever.